THE HEART OF ALEPPO by Ammar Habib #THOAPrism. 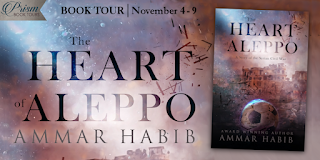 Written by an author who grew up in Texas, this is a difficult story.  I was so pleased to see it written for this age group.  I hope many of you will consider reading it.

The Heart of Aleppo:

A Story of the Syrian Civil War
By Ammar Habib
YA Contemporary
Paperback & ebook, 252 Pages
July 26th, 2018
On Tour with Prism Book Tours


From the ashes of the Syrian Civil War comes this story of hope, love, and courage...


After standing for over 7,000 years, Aleppo's ruin came overnight. Separated from his family during the night the rebels attacked the city, thirteen-year-old Zaid Kadir is lost in the middle of a war zone. Alongside his friends, he is forced to survive the dangers of a civil war he does not even fully understand. Zaid witnesses the destruction of the brutal Syrian Civil War as it grows more deadly by the day and rips his city apart. However, as he braves this destruction, as he desperately tries to survive this catastrophe, he discovers something. Zaid realizes that it is in the darkest hours when humanity's spirit of hope burns brightest.

Every time I look up above, hoping to catch some sight of the heavens, all I see is smoke. It’s blocking out any light from the stars. There will be no relief tonight.
I notice a silhouette up ahead. It… it appears to be the minaret of a masjid. Hope is suddenly injected into my heart. With every step, the minaret breaks out of the smoke, and I can better perceive the masjid itself. I see its domed roof. It’s standing tall above all the destruction. If it’s still standing, it’ll be safe inside, right? Nobody will come into a masjid and harm us.
But then I see the entrance. The wall has collapsed in on itself. It’s been blown into a pile of rubble, completely blocking the front doors. One of the minarets has broken off and fallen straight down, smashing into the marble-tiled courtyard. The minaret lies broken and scattered, no more recognizable than any of the other ruined buildings.
As the flames of another wreckage reflect off of the minaret and masjid, I stare at it in disbelief for a long moment. I almost ask Salman and Fatima if we should try to go around the masjid and look for the women’s entrance, but they hardly even give it a glance before continuing down the broken road. And so, without a word, I follow.
We keep trudging through the darkness, not knowing what lays even twenty feet ahead of us. For a little while, I think I hear some gunfire a few streets down. It spikes up for a moment, breaking the silence. We all stop. But then it dies off… and we keep moving.
There is a slight nighttime breeze long into our journey. The wind blows through the hollow streets, but it’s barely strong enough to be felt. However, as soon as it hits me, I look up and thank Allah. Just this drop is enough to quench my thirst for a while.
A few blocks later, I think I hear some sirens not too far away. They sound like police sirens. Or maybe an ambulance’s. Salman and Fatima don’t seem to react to it. However, the noise disappears as if it was never there, just like everything else tonight. Maybe my mind is playing tricks on me. We march on.
The longer and further we go, the louder the sound of silence becomes. It grips my soul like an unrelenting leech. It speaks into my heart, letting me know just how forsaken these streets have become. Is the entire city as desolate as here?

Ammar Habib is a bestselling and award-winning author who was born in Lake Jackson, Texas in 1993. Ammar enjoys crafting stories that are not only entertaining but will also stay with the reader for a long time. Ammar presently resides in his hometown with his family, all of whom are his biggest fans. He draws his inspiration from his family, imagination, and the world around him.

One winner will receive a signed copy of Habib's national award-winning novel, Memories of My Future (US only). Memories of My Future is a historical/inspirational novel that was published in 2016. It received several accolades after its release, including the Independent Press Award in May 2017.