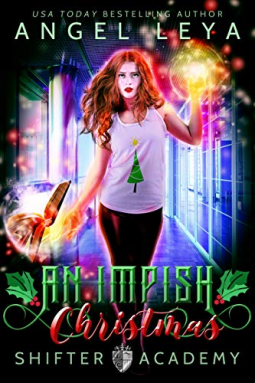 This Year, Kenzie's going to make Christmas great again. ;)
Kenzie is finally at the Shifter Academy, living her dreams, dating her super hot (and super granola) cat shifter boyfriend. After all the drama of last year, making this Christmas the best ever should be a piece of pie (make that a large slice with extra whipped cream). Right?
Wrong.
When Kenzie’s Christmas plans meet with heavy reluctance, Kenzie’s left holding the decorations all by herself. Oh, except for the impossibly adorable mer guy, who seemed to be on team make-Kenzie’s-life-miserable, now wants to help. What’s with that?
Add to the mix a dash of magic gone awry, and now Kenzie’s chasing a magical imp that’s tearing down all her attempts to jollify the joint.
She’ll need to track down the imp, undo the errant magic, and get everyone in the Christmas spirit before time runs out. Fail, and she could be expelled—or worse, the school might just come crumbling down. Again.
This story is a part of the Shifter Academy world, and occurs about one year following the USA Today bestselling Siren Prophecy series, but can be read as a stand-alone novel. Perfect for fans of heartwarming Christmas shenanigans, like The Grinch, and sweet holiday romantic comedies.

Well put up the Christmas tree and hang your tinsel because An Impish Christmas is the best, lighthearted, fun and funniest book I have read all Season long!  Although Angel is a new author to me, I could not resist the description of this book and I was not one bit disappointed. Trying to spread some major Christmas cheer is a big enough job on its own.  Adding in a terrorizing little 'anti-helper' or imp made it 3 times harder but Kenzie was not about to be deterred. This book had me giggling, smiling and laughing as I read along at practically breakneck speed.  It was such a fast read, I had it done in a couple of hours.  Of course, then I was sad because the fun was over. I did think her boyfriend Wes needed to get over himself a little but thank heavens for Trevor.  Although this is linked to the other Shifter Academy books, it truly can stand on it's own. So if you are looking for some Christmas Spirit or just a good, fun book, do not miss An Impish Christmas!

I received this book I requested free of charge and am voluntarily leaving my review.  All opinions expressed therein are my own.
at December 03, 2019