Asbury High and the Thief's Gamble
by Kelly Brady Channick
Genre: YA Mystery

Asbury, although a haven to shoobies (tourists) in the summer, is a divided coastal town. With the rich half living in the East, and the rest living in the West, most friendships stay within their boundaries. Luckily for a spunky-smart tomboy, a clever billionaire athlete, a gossipy-in-the-know cheerleader, and a wrong side of the tracks technological genius, boundaries are a foreign concept. In fact, Maddie, Cornelious, Carly, and Pilot have been Asbury’s strongest quartet for years, despite their vast differences. Nevertheless, after a few weeks of starting high school, the foursome’s friendship is tested.
After a string of burglaries in East Asbury, the gang decides to solve the crime as a reason to make time for each other. The further they investigate, the more they find themselves constantly side-stepping tweedle-dee and tweedle-dum-like policemen, outsmarting local bully JB and his gang of misfits, and dealing with Cornelious’ billionaire father and Governor---who has disapproved of his son’s choice of friends for years. In addition to these obstacles, the foursome must also adapt to their evolving friendship with each other and their peers.
With upperclassmen, teachers, and teammates vying for their attention, the gang must work even harder to root out the red-herrings from the true thief. Aided by Carly’s gossip, Maddie’s boldness, Cornelious’ quick-wit, and Pilot’s knack for technology, the gang soon discovers its edge over the local police department.

During the weekend, Asburyans faced something they never before dealt with: a major break-in into one of East Asbury's most prominent families had resulted in a two-thousand-dollar theft. Although this amount wasn’t a lot for an East-sider, the town was full of unrest. For everyone knows the first break-in, is never the last.
"This sucks! My mom tried changing the locks four times before she let us out of the house! Mia had to calm her down just so she wouldn't end up locking us inside of the house."
"Lucky you Carly," Cornelious mumbled, "My mom said that she would die if someone harmed the cat! Not the money. Not the car. Not even me! And then my dad said I’m to come right home after practice and no more hanging out with those hooligans. He honestly thinks you guys broke into the Lomlings!"
Maddie turned to view Kirk Lomling and the pity party he was throwing. If I had been ripped off two grand I wouldn’t sit around and ask for everyone’s sympathy, Maddie thought watching Kirk spew details and statistics of the improbability of a theft occurring in his security-ridden home---scratch that---mansion. She was about to crack a joke over Kirk’s mansion-theft, but when she faced her friends she felt the awkward tension beginning to rise. Suddenly, she thought of a bright idea, "Hey guys! I know what we should do!" Maddie exclaimed and motioned for them all to move closer. Seeing as they were in lunch it was hard enough to hear each other. "We should try to solve this ourselves!"
"Great idea! Why didn't I think of it?!" Carly's voice got higher as she spoke. "Four fourteen-year-olds trying to solve a break-in, now that's hilarious. Oh! I do have one question...why?"
"Well, seeing as our schedules are very different after school, this will be an excuse for us to get together, and we could think of it as an adventure. Plus, we did win the murder-mystery night in middle school each year, eh?"
“Oh yeah I forgot, the robber is obviously Mr. Hayfield dressed up as Colonel Mustard.”
"Maddie, it sounds fun. But where would we even start?" Pilot asked, while nervously glancing at Carly, afraid to disagree. The table went silent for a few minutes to reflect on this idea.
“I can’t believe we’re honestly considering this,” Carly interjected, effectively breaking the silence.
"Well, we could start at the Lomling's. You know, it was Kirk's family that was robbed. We could try to find their security room and look at the tapes to see if anything is out of place." Cornelious announced out of nowhere.
"Okay. Cool. So let's----” but before Maddie could finish they were interrupted by the bell.
"STUDY HALL!" Maddie boomed shuffling out the door, and into the hall.
**** 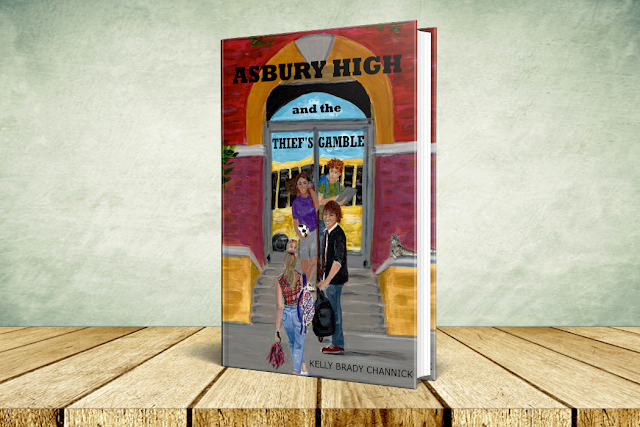 For as long as she could remember, Kelly Brady Channick loved making up stories and leaving her listeners/readers on the edge of their seats.

Perhaps that’s why she always managed to talk herself out of trouble...

After graduating from NJ’s own Ocean City High School, Kelly accepted a basketball scholarship to Holy Family University, in Philadelphia. As a lifelong athlete, Kelly understands the importance of teamwork and overcoming adversity, something she hopes translates into her books.

Before writing page-turners, she taught first, fifth, sixth, seventh and eighth grade — like a dessert menu, she simply had to test them all out. But her favorite job is the one she’s now doing full time: writing. Kelly loves to craft whodunit mysteries, leading readers through various twists and turns filled with red-herrings, hidden clues, and more peculiar characters than a reality show.

If you want to know when Kelly’s next book will come out, please visit her website at http://www.kbchannick.com, where you can sign up to receive emails providing updates for new releases, or contact her directly, as well as win fun giveaways, and receive up to date news.