Check out my stop on the blog tour for The Seventh Blessing by Ricky Baxter! 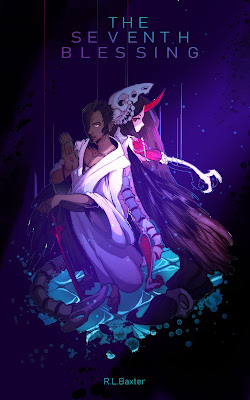 
Within the world of Popla, the gods rule over mankind. Thanks to their order, mankind lives safe from the dangers of the world’s monsters and demon beasts. However, even with their protection, there are some who have chosen to rebel against their benevolent masters.

Having lost his sister to a mysterious sickness called the Seventh Blessing, rumored to have been created by the gods themselves, A young man named Luna will attempt to rescue her soul from death. Armed with a living blade, he will oppose the order of the gods - going as far as to request the aid of a legendary demon named Ten.

Within this epic fantasy adventure, the trio will explore a world together, where divinity and mortality are intertwined. However, at the end of their journey, will the true secret of the Seventh Blessing tear them apart?

Under a dark and windy night, within a large field, I stand opposite a magnificent being. Its body is brighter than the sun, and its attire consists of long silk, a golden gown that sparkles as though it were filled with endless stars. A large swirling halo hangs just above its head, as the being glares nervously at me. It is nervous, not because of my physical appearance. After all, I am just a boy. What it fears, is my capability.
Sporting a white robe, I hold a feisty grin - crossing my arms. Dancing around me, a mysterious thin black sword levitates by my side. Breaking the silence between the glowing being and me, address the foe.
“What’s the matter? You don’t look so confident… for a god. Are you not embarrassed?” I ask, tauntingly.
“How dare you insult me? I will not stand for such talk!”
Upon a small chuckle, I slowly blink and respond, “Sigh… please remind me of your name again? Oh, that’s right, it was Gaudium, correct? Listen – we both know how this is going to end. Tell me everything I need to know if you want to keep your immortality.”
The godly being shivers before shouting “You… you do not scare me. On the contrary, it is you who should be scared… by the likes of I: Gaudium!” Arms stretched forward, the god releases a blinding beam of light from its hands.
Standing firm, I bat not a single eyelid, as the large surge of light races directly towards me. Speaking in a monotone fashion, I whisper to the dancing sword, “Adamas!”
On cue, the sword zips protectively in front, as the projectile arrives only inches apart from me. Astonishingly, the sword cuts into the light – causing the beam to ricochet into the distance before colliding and exploding against a distant mountain. The explosion sweeps outward and rises to the heavens, as I keep a focused stare – watched by the now speechless deity.

This was a magical and fantastical journey through the fantasy world of Popla. I found the world-building to be mystical and unique as the characters followed their lengthy adventure.  You never knew what was around the next bend and I was often surprised as I followed along.  The primary characters were the trio of Luna, Adamas and Ten however the story was told completely from the point of view of Luna.  That gave me some interesting insight into him, his motivations and his feelings.  When I reached the end of the book, I felt as though I'd been on the adventure with them and needed to take some time to consider all that had transpired.  It was truly unique.

As this was one of Ricky Baxter's first fantasy novels, I'll be very interested to see where he goes from here in his writing.  I recommend this to lovers of anime, first-person stories and those who are looking for a good, unique read.

I received this complimentary book upon request and am leaving my review voluntarily.  All opinions are my own.


Ricky Baxter is the author of Gideon and the Crimson Samurai, a fantasy novel newly released for Amazon Kindle. He is an avid blogger, giving advice and thoughts to fellow creators from all walks of life. His other works include Colours of Destiny, a Youtube visual novel. Currently, he lives in London England where he writes and blogs.

Starting out as a composer since graduating with a Ba(Hons) in music and multimedia, Ricky worked for many independent short film directors - for over six years, gaining notable IMDB credits. Since then, he has embraced his earlier passion of writing fictional stories.