The sequel to the highly anticipated Anomaly is a twisty-turny, romantic page turner perfect for fans of The Matrix.

Summary:
Worst. Road Trip. Ever.
Escaping with Reid Wentworth should have been fun, but how can I enjoy it when I just (accidentally) killed someone, my mom and brother are in danger, and the Consortium is trying to enslave humanity? (Yeah, they aren't fooling around.)So feeling something for Reid Wentworth was not part of the plan. Trying to help unite the Resistance against the Consortium means I can’t be distracted by hot boys.


The Resistance secret hideout isn’t exactly the rebel base of my dreams. A traitor there wants me dead, but we have no idea who it is. And with both the Resistance and the Consortium trying to control me, the only one I can trust is Reid. If we’re going to have any chance of protecting my family, controlling my unstable powers, and surviving the clash between the Oculi factions, I’m going to have to catch this traitor. By using myself as bait.

Reality is only an illusion. Except for those who can control it…


My first boyfriend dumped me—happy birthday, Josie!—my dad is who knows where, I have some weird virus that makes me want to hurl, and now my ex is licking another girl’s tonsils. Oh, and I’m officially the same age as my brother was when he died. Yeah, today is about as fun-filled as the swamps of Dagobah. But then weird things start happening…

Like I make something materialize just by thinking about it.

When hottily-hot badass Reid Wentworth shows up on a motorcycle, everything changes. Like, everything. Who I am. My family. What really happened to my brother. Existence. I am Oculi, and I have the ability to change reality with my thoughts. Now Reid, in all his hotness, is charged with guiding and protecting me as I begin learning how to bend reality. And he’s the only thing standing between me and the secret organization that wants me dead…

Add this book to you TBR list at
Goodreads 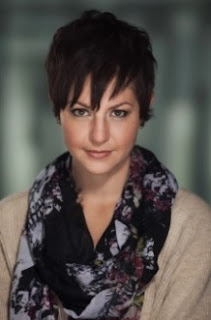 Tonya Kuper writes young adult science fiction and contemporary novels. She first fell in love with reading in elementary school, which eventually lead to earning a BA in Elementary Education and a MS in Reading Education, but she never thought she’d write a novel, let alone several. When Tonya isn’t writing, she teaches Young Adult Literature Writing Workshop at the University of Nebraska at Omaha, laughs as much as possible, loves music, and nerds-out over Star Wars, Marvel, Sherlock, and all things pop-c
ulture. She lives in Omaha, NE with her husband and two rad boys.