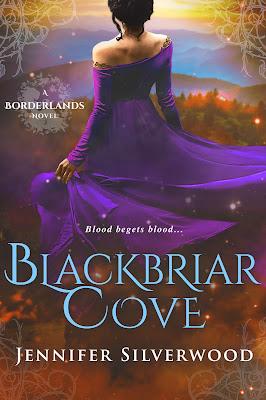 
In a single night of madness, Amie won the battle and lost the two people she loved most. As she struggles to be the queen her people need, her family band together against the hidden threat at their borders.

Haunted by the ghosts of her past, Amie strikes a pact with an ancient being called The Storyteller. In order to see Emrys again, they must put aside their blood feud, and cross the veil to a place of spirits and monsters.

Blackbriar Cove is a land where superstition and chaos reign, and spirits plague dreams. A dark curse has twisted the Unseelie who once lived in the home the Blackbriar twins vowed never to return. But death is not the end in Silver Hollow, and the war for the Borderlands has only begun.


Faye fell back into the mud as her enemy’s memories released her. For a long breathless moment, she listened to the patter of rain in the forest and breathed with her own skin. Not the echo of a life already snuffed out, fading into the earth.

Jo had always hated when Faye used her gifts like this. So Faye only used her otherness when her twin wasn’t around.

What Joey don’t know… well, her sister had James now. As for Faye?

A deep chuckle bubbled past her throat at the memories she pulled from her “date’s” remains.

She didn’t hear the soft tread until he was upon her.

Faye’s laughter faded as she turned her smile upon Arthur Hawkeye.

The once and future king, she thought with a giggle.

She pretended she wasn’t at all embarrassed to be caught like this, any more than she pretended not to appreciate the legendary man’s answering grin.

“Hey Ginger,” she greeted. Her best friend’s grandfather sank down to her side, looking entirely too gorgeous for his age.

“Mind if I share your restful abode?” Arthur’s musical voice rolled over her spine and sent shivers to her gut. He drew Excalibur—yes, that sword—over the golem’s remains.

“I wonder,” he began, softer now, “how many more they shall send before Jessamiene discovers your little scheme, Dark Heart.”

Faye shivered at the echo of the golem’s thought following the nickname. One thing about Arthur that Faye tended to forget; Amie would always come first in his book. No one had been able to predict the old man, not since Amie had saved her grandfather’s life and somehow reversed the aging process. Now it was not only impossible to tell his age but also improbable to untangle his motivations.

She opted for honesty this time. “Amie has enough to deal with, and we’ve kept them off the castle grounds so far. That has to count for something, right?”

Arthur nodded, pausing in his doodles in the mud so she could see the Celtic runes he’d left behind. His red hair gleamed in the moonlight as he turned an amused cerulean eye her way. “Aye, and it’ll be your funeral when she finds out.”

Faye stabbed her dagger into the earth and sat up until their gazes were even. “We haven’t learned enough. Once we know who’s sending them and why…”

Arthur’s abrupt guffaw interrupted her. She rocked as he elbowed her side. “Is that what you tell yourselves? You don’t think she doesn’t already know? She’s the bloody Emerald Eyes, love. And she remembers everything now. They’re too afraid of her to make any real moves.”

Faye’s attraction to the human was replaced by white-hot ire, as was often the case. “So we should let them spy on us?!”

Arthur shook his head and tilted his chin up to taste the rain. “Ever considered spying on their spies?”

Faye gaped a moment, and then flashed him a wicked grin. “Ever consider dating again, old man?”

“For you, I might make an exception, lass,” he replied. 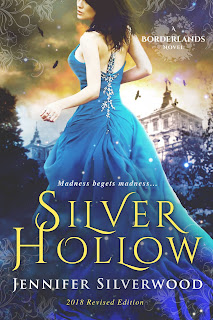 
Amie Wentworth trusts books more than people. After her parents' deaths ten years before, she writes fiction to escape reality. A timely invitation from her long-lost uncle arrives, but she's used to ignoring the mysterious surrounding her life.

Until she is stabbed in an alley and brought back to life by a handsome stranger. Soon Amie is dragged into the very sort of tale she is used to selling. To make matters worse, the man who saved her life keeps turning up and her would-be-murderer is still at large.

After crossing the Atlantic to her father’s homeland, she discovers a world beyond imagining. Silver Hollow is a place of ancient traditions and supernatural dangers, where everything is the opposite of what it seems and few escape sane. Faced with an impossible choice, Amie is forced to confront a deadly family legacy while remembering a life she soon wishes to forget.

Jennifer Silverwood has been involved in the publishing world since 2012 and is passionate about supporting the writing community however she can. After studying traditional art at University, she loves helping Qamber Designs & Media bring authors’ books to life. Jennifer is the author of ten novels and founder of We Write Fantasy, a blog and support group for fellow genre authors. She hopes to share her passion for art, music, and literature via words and work ethic.

Learn more about Jenn’s misadventures in writing & life at www.jennifersilverwood.com