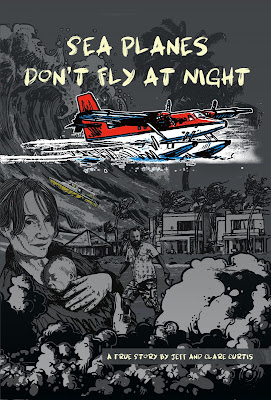 It was a small decision that changed their lives forever.

Successful young couple Jeff and Clare Curtis are enjoying a romantic babymoon in the Maldives when Clare goes into premature labour, nine weeks early. The nearest hospital is a storm-ridden boat ride away, as it soon becomes clear that the lives of mother and child are in jeopardy. Can they get medical help in time?

With the storm continuing to rage, the events that follow stretch Clare and Jeff’s mental, emotional and physical limits to breaking point. Working as a team, they call on their own resources, the assistance of strangers and even divine intervention – whatever it takes to save the life of their unborn child.

Clare and Jeff have written this book to thank the many people who did what they could to help save the life of their premature baby. In a world where segregation and violence are often seen as commonplace, the world they discovered was one of kindness and support. Join them on their personal journey back into the depths of their worst fears, as they retell their quest to save the life of their child and bring him home alive.

I was lying in bed in my bloodstained nightie. I didn’t feel as if I was being particularly helpful, but everyone was telling me in no uncertain terms that I needed to relax. Are they serious? I remember thinking. Relax was not justifiable in my mind. I was trying to process what the doctor had just said to me, to us. Labour? I thought dismissively. What is this woman talking about? I had seen the films, the documentaries of birthing and what was required, and even though I hadn’t at that point completed the pre-natal course, I was certain that labour pains felt different to constipation. When was the last time I had gone to the toilet? I thought logically to myself. Surely, I’m just constipated?

Really, this must be a big misunderstanding that was turning into a three-ring circus, a charade of embarrassment at my expense that would eventually amount to nothing. Plus, when I checked again, I could see the bleeding had begun to subside. I was sure that it was just a false alarm.

‘It’s okay,’ Jeff said levelly. ‘You just need to rest and make sure the baby is safe.’

I didn’t have a choice, so I did as I was being told, knowing that for that moment it was most certainly the best thing for me, and for that matter the baby. I would do whatever it took to ensure a positive outcome. As numb as I was, I would have to muster all of my natural resolve and do exactly what was necessary for the survival of my child. It was terribly hard, and somewhere in the back of my mind, I knew tragic things happened when you least expected them.

I also knew worrying would not help or change that. At that point, there simply was no knowing what would happen; either the baby had already miscarried, or it was going to be delivered whenever and wherever it decided to enter the world.

I could see phone calls being made and a plan was put into motion to expedite my move to the best possible place to deliver or remove the miscarried baby. I wouldn’t class myself as a particularly religious person, but I lay there hoping, even praying, that my baby was still alive inside me. The not knowing was terrifying. I felt nauseous.

Poised but concerned, out of Clare’s earshot, I spoke to the doctor. ‘How are we going to move her?’ The weather is horrendous. ‘Surely we’ll have to wait until it clears?’ I reasoned with the doctor, as much as to try to convince myself as her, but to no avail with either.

‘Sir, we have no facilities to deliver a premature baby here on this tiny island. Especially a baby that is in a breech position; it’s just too dangerous.’

I came to my senses, but I just stared at her, my mind churning like the monstrous waves on the storm-ridden sea outside, searching for any alternative solution.

About the Author
Jeff Curtis has lived with his wife, Clare, in the Middle East for close to 14 years and is a true entrepreneur in every sense of the word.  A former oil trader who has a little more time on his hands these days has experimented with a number of hobbies, in which he can now boast being a trained barista, racing driver, pilot and even a certified Reiki practitioner. Jeff is now first and foremost a family man who has immersed himself in the diversity of life in the Middle East and used his geographic location as a steppingstone to travel to many countries of the world and experience a host of cultures far removed from his European heritage.

Jeff discovered his writing talents when a real-life drama rocked the family that threw him and Clare into a life and death scenario.  Jeff has managed to turn a life changing event into a gripping thriller as the couple take you on their personal journey in which they discover their true inner strengths, as well as a world that we sometimes fear has been lost, a kind one. Jeff writes with the emotion and drama, which the story demands, whilst sharing his own dry humor which helped them get through what was an unfathomable event.

GIVEAWAY:
a Rafflecopter giveaway
at December 10, 2019