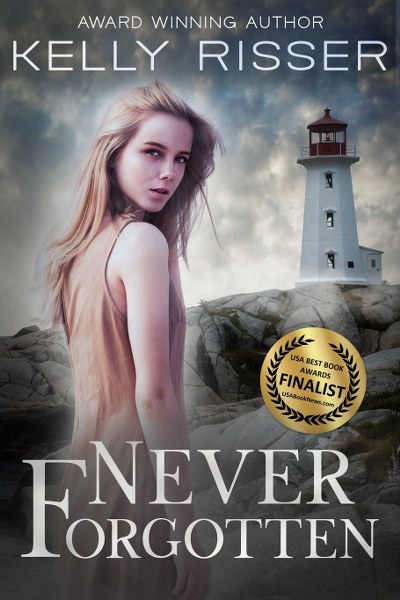 In this coming of age story, Meara Quinn is about to find out there are worse things than moving to a tiny oceanside town before her senior year. Like discovering there's a secret being kept from her and knowing it's a life-changer.

After experiencing vivid visions of her absentee father, Meara decides she deserves answers. With the help of her new friend Evan, a guy she happens to be falling for, she embarks on a journey in the hopes of unlocking family history and finding her true self. But when she meets a handsome stranger at a local club who knows far more about her than he should, her world is again shaken. In him, Meara may have uncovered the key to the very secret that will reveal not only who she is... but what she is.

The Never Forgotten series starts as a light paranormal romance with an Irish/Scottish folklore twist and grows into an underwater urban fantasy where love, loyalty and friendship face the ultimate test. If you like mermaids, sirens, and other water fae you may not have met before, this series is for you.

With over 300 five-star ratings on Goodreads, the Never Forgotten series is a Best Book Award-finalist young adult paranormal romance series that will appeal to fans of House of Royale by Jaymin Eve, Sirangel by Lucia Ashta, and Born of Water by A.L. Knorr.

I just love books that I pick up and then cannot, in spite of everything else going on in my life, put it down.  This was one of those books!  I simply became immersed in it. I loved how relatable the characters were.  Meara was such an endearing main character.  My heart was breaking for her and her terminally ill mom.  And Evan...oh Evan...what a perfect male protagonist!  He showed great empathy for Meara and man, was he a hottie!!

One of the best things was the Worldbuilding that Kelly had done.  I loved her locations, especially once they moved near the cold Atlantic Ocean. Brrrr.  She made me want hot tea and a warm blankie to read with.

If you know me at all, you know I have a wide taste in book genres, ranging from historical (come see historicalgraffiti.blog, my new Historical review blog!) to Fantasy to Contemporary Westerns to Fairytales to Paranormal books and more.  Never Forgotten is a combo Paranormal/Fantasy but where the characters are king...the ideal balance for all that is involved here.  Oooh, and it even has Selkies!  (Not sure what a Selkie is?  Read the Outlander series!)

All in all, this wonderful, clean book has me dying for the next book in the series.  Thank you, Kelly, for a whole new world to read and fall in love with!

I received this book freely upon request from the author and am voluntarily leaving my review.  All opinions are my own. 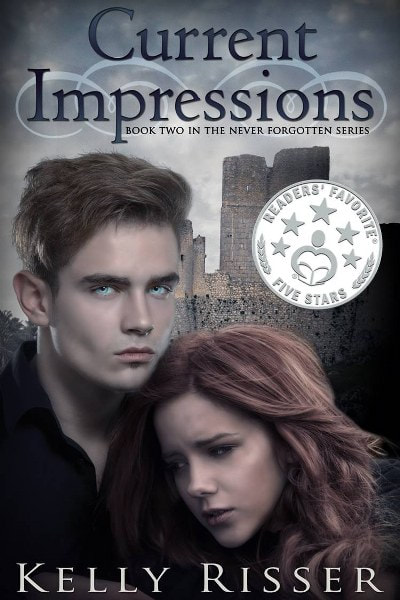 Current Impressions is a Readers Favorite award winner and the second novel in the best-selling Never Forgotten series by Kelly Risser.

After an emotionally draining year, Meara Quinn is not the same carefree and innocent girl. Her mom is gone. Graduation is over. Taking a leap of faith and temporarily separating from her one love—Evan—Meara joins her father's world on a journey to learn more about who she is.

Too bad life is not all starfish and seashells. Meara gains magical abilities, but she's forced to undergo intense training so she knows what to do with them. Her father chooses her aunt and Kieran as her trainers. And Kieran—a powerful male who's not from their clan—has the unnerving ability to infuriate and intrigue Meara at the same time.

While Meara begins her new life, Evan endures with her memory and the knowledge that he will see her in July when his internship begins. Although excited about gaining real world experience, it's the thought of seeing Meara that really drives him. Unfortunately, Evan finds it hard to focus on anything when he's suffering from vivid nightmares and screaming headaches.

When Meara and Evan reunite, everything seems to fall back into place. The summer appears to be perfect. Then two of her father's guards are found dead, and foul play is suspected. The façade melts away. Someone is targeting them, and Meara must discover who it is and why. She turns to Evan to help her, but when he gives her the hot and cold treatment, she's left feeling alone and confused.

As the puzzle pieces move into place, will Meara be able to solve the mystery in time to save her clan and her relationship? 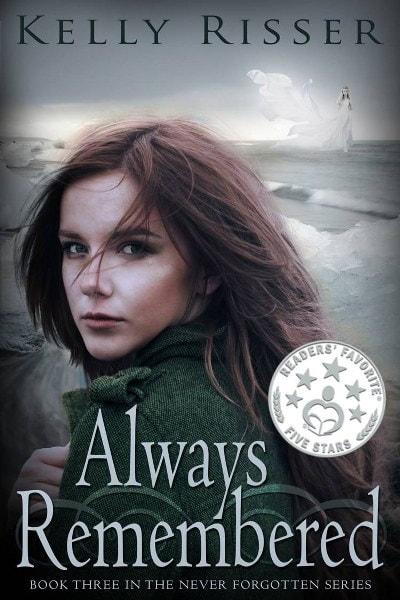 Always Remembered is the third novel in the best-selling Never Forgotten series by Kelly Risser.

One clue… what does it mean?

Ken, the leader of the Blue Men of the Minch, has kidnapped Evan. Before they left, Evan was able to leave a package for Meara—her grandfather's necklace wrapped in a cloth napkin with one word written in blood. Azuria. Unfortunately, Meara doesn't understand it and neither does her dad or Kieran.

When Dad and Aunt Brigid attempt to rescue Evan, Meara and Kieran begin to train the clan on how to fight and defend their home. A war is brewing, and Meara is determined their people must prepare for the battle. The training sessions are long and arduous, but the Selkies work hard to learn.

Meanwhile, Evan wakes and finds himself in Belle Tresor, the home of sirens. He's bound to his blue form, unable to transform to human, and Ken has plans to use Evan's powers to destroy the Selkies. Thankfully, he's not alone. He befriends a siren named Deanna and several Blue Men. Can he trust them to help him escape or do they have ulterior motives?

As both sides prepare for an ultimate confrontation, the stakes are high and friendships are tested. Some will rise to be victorious. Some will be destroyed. But love and loyalty will be always remembered in this exciting conclusion to the Never Forgotten series. 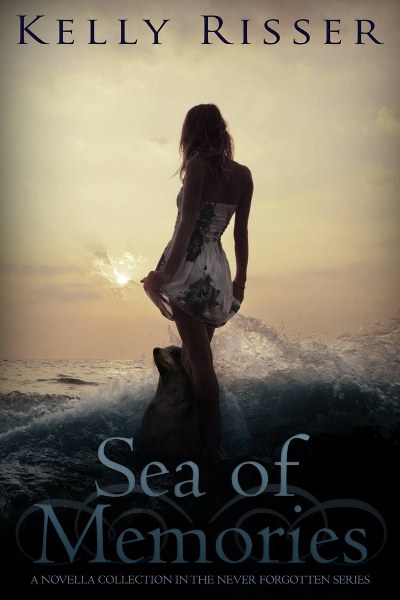 Sometimes, we reach the end of a story and realize there is more to be told. This is the case with Sea of Memories, a collection of novellas set in the world of Never Forgotten. Fans of this series will not be disappointed!

Travel with Meara and Kieran to North America where they visit her grandparents and his family. Along the way, stop at Mirage, the dance club where the couple first met, and see the encounter from Kieran's point of view.
Struck in the Club - On the orders of his father, Kieran travels to Nova Scotia to spy on David's daughter. After an encounter in a dance club, he may have found more than he bargained for.

Journey to the past and meet Kieran's mom, Sera. Learn why she is no longer part of their lives.
What Will Be - Sera is a Selkie who enjoys her family and her daily routine of solitude. While out on one of her morning swims, she finds an injured man floating in the ocean. Unable to see anyone suffer, she rescues him, even after the warnings she received as a child about the evilness of human males. He may be safe now, but is she?

Go back to where it all started and discover along with Meara how her parents met and fell in love.
A Rock and A Hard Place – Visiting his maternal grandparents in Nova Scotia, David is determined to find out who murdered his parents and why. He doesn't expect the evidence to take him to a small fishing village called Peggy's Cove. He certainly doesn't expect to find love there, especially when it comes in the form of a spunky little brunette… and a human one at that.

Finally, join Meara, Ula, and other friends old and new to remember the past, celebrate the present, and anticipate the future.
Something Blue - Ula's been invited to a banquet at Ronac in her niece's honor. Because it will be Meara's first Christmas without her mom, Ula convinces her boyfriend, Vesh, and others that they need to throw a surprise holiday celebration. Selkies don't celebrate Christmas and neither do the Blue Men of the Minch. It will be a holiday full of surprises for all. 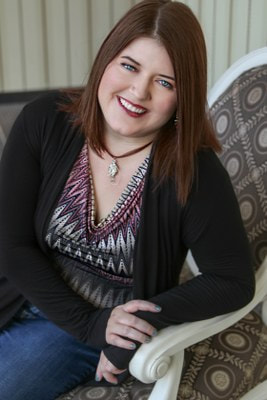 Kelly Risser knew at a young age what she wanted to be when she grew up. Unfortunately, Fairytale Princess was not a lucrative career. Leaving the castle and wand behind, she entered the world of creative business writing where she worked in advertising, marketing, and training at various companies.

She's often found lamenting, "It's hard to write when there's so many good books to read!" So, when she's not immersed in the middle of someone else's fantasy world, she's busy creating one of her own. This world is introduced in her first novel, Never Forgotten.

Kelly lives in Wisconsin with her husband and two children. They share their home with Clyde the Whoodle and a school of fish. 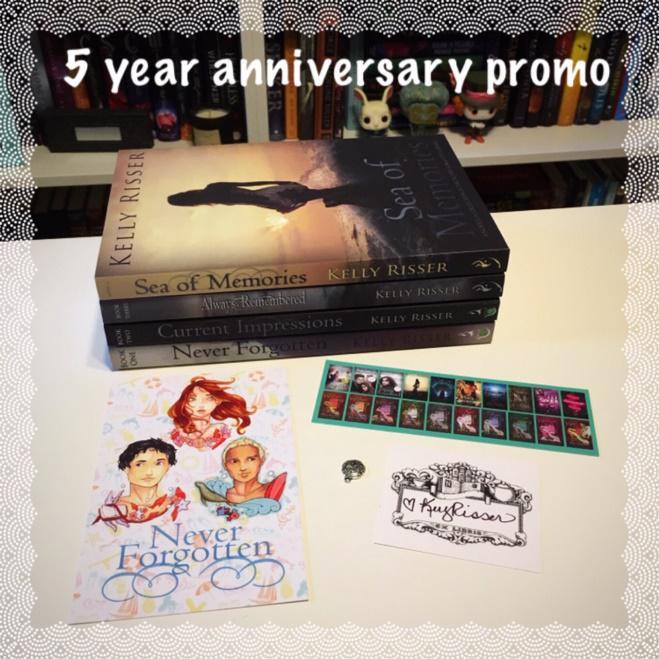 Five years ago, Kelly realized her dream of becoming a published author with Never Forgotten. She never imagined that first book would lead to three more and a complete series. She will be forever grateful to Clean Teen Publishing for taking a chance on an unknown writer, to her readers for loving Meara, Evan, Kieran and the full cast of characters that are so dear to her heart, and to the book community for supporting and promoting her work.
As a thank you, Kelly wants to give something back and share her happiness with all of you. Purchase any book in the series (with the exception of the free e-book of Never Forgotten), complete the online form with your uploaded proof of purchase, and receive a signed paperback (first 50 submissions; U.S. only) or a limited edition swag pack (next 200 submissions, open internationally).