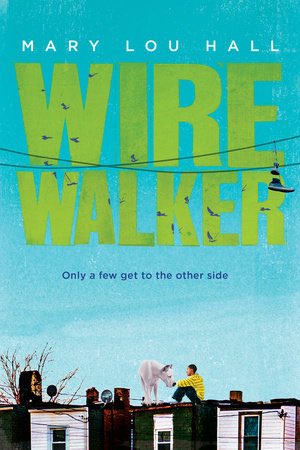 Sometimes heroes can be found in the most unlikely places.

Fourteen-year-old Clarence Feather knows no world beyond desolate Mayfair Heights. Three years ago, his mother was killed before his eyes by a stray bullet. When his father becomes unable to keep the family afloat, Clarence is manipulated into running drugs. But he longs to be a good person, in spite of the seemingly impossible odds.

Wandering through his neighborhood, Clarence meets Mona, a huge albino Great Dane. The two develop a deep bond. When he is forced to attend a dog fight as a rite of passage, Clarence realizes that Mona isn’t safe, and neither is he. Can he find a way to protect Mona? Can he survive life in Mayfair Heights and still become the person his mother wanted him to be?

For more information go to http://www.penguinteen.com/book/315201-wirewalker-by-mary-lou-hall/